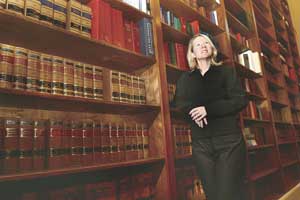 “We feel like we reared her,” said firm partner Andy Davis. “She came on board as a helper and would run errands and help file. She has become a great lawyer. She has a great presence with clients and in courtroom. We are very excited to offer her a partnership.”

Since her teen years, Treadaway has had a great interest in law. In high school she was part of the mock trial team at Model, something she now describes as one of her favorite activities. She enjoyed that experience so much that she came back as an adult, coaching mock trial and serving as regional coordinator for the competition.

From high school, Treadaway moved on to college but did not stray far away from home. Majoring in English and history, she attended Shorter College. Rather than study pre-law, she believed her choices would equip her with the reading and writing skills needed to tackle law.

“It was a great experience,” Treadaway says of Shorter. “I still have lots of good friends including faculty and staff.”

Once she was qualified to practice law, she returned to Rome, but did not find employment with her old firm. “When she graduated, we did not have room for another lawyer,” Davis said. “So she went to work for another firm.”

“I went to work for McGruder and Sumner,” Treadaway said. “I had known lawyers there from being a runner. ” It was only a nine-month diversion in the end, and then she was back home. However, a move to the other side of the courtroom almost tempted her away.

“When it rains, it pours,” she said. “At the same time, I had an offer to go to the DA’s office and work as a prosecutor. I prayed about the decision, talked with Tami Colston, who was then DA, and talked with King Askew. Ultimately I decided to come home to Brinson, Askew and Berry. It really did feel like home.”

Seven years later, Treadaway is a partner at the firm where she began, but downplays being the first female.

“I think it’s been a great ride,” she said. “I have never felt it was a boys club, felt comfortable with partners, who happen to be men. It was a huge honor to be asked to be a partner in a firm like Brinson, Askew and Berry. It is a huge honor male or female.”

Go back | Send this page to a friend