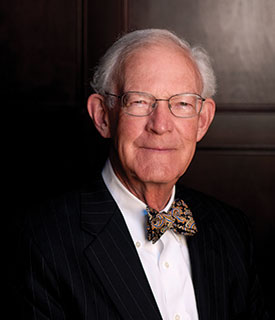 On December 28, 1989, Norman S. Fletcher was appointed to the Supreme Court of Georgia.  He served on that court until his retirement on June 30, 2005.  Norman spent his last four years on the court as Chief Justice.

In 2005, following his retirement, Justice Fletcher joined Brinson Askew Berry as Of Counsel, bringing with him his 47 years of experience as a trial lawyer, counselor, city attorney, Floyd county attorney, and general practitioner. Norman began his law practice in 1958 as an associate in the law firm of Matthews, Maddox, Walton and Smith, Rome, Georgia. In 1963, he moved to LaFayette to form a partnership with the late George P. Shaw and Irwin W. Stolz, Jr. While in private practice, he represented the State of Georgia as a Special Assistant Attorney General and he also served as City Attorney for the City of LaFayette and County Attorney for Walker County. He continued his general practice of law in LaFayette until his appointment to the Supreme Court.

Justice Fletcher has a distinguished record of service to the legal profession and the community. He served as a member of the Board of Visitors for the University of Georgia School of Law (1989-95), and was its Chairman (1994-95). He is a fellow of the American Bar Foundation and the Georgia Bar Foundation and is a Master in the Joseph Henry Lumpkin Inn of Court. In 1989, he served as co-chair of the State Bar's commission on lawyer disciplinary reform. Prior to his appointment to the Supreme Court he served as a member of the State Disciplinary Board (1984-1987), chair of the Investigative Panel (1986-87), chair of Local Government Section of State Bar (1977-78), President of City Attorney's Section of Georgia Municipal Association (1978-79), board member of Attorney's Title Guaranty Fund (1971-75), President of Lookout Mountain Bar Association (1973-74), and President of the University of Georgia Law School Association (1977). While residing in LaFayette, Norman served three terms on the board of the LaFayette Chamber of Commerce and as the former president of the LaFayette Rotary Club.