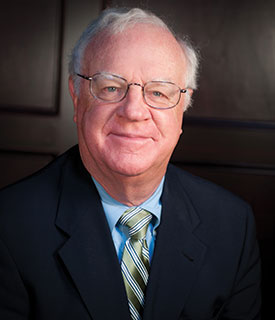 Robert M. Brinson is a founding partner and Of Counsel for Brinson Askew Berry. He engages in an active, hands-on trial practice in Rome, North Georgia and Greater Atlanta, and his litigation, trial and appellate experience after many years of practice includes general business litigation, class actions (Plaintiff & Defendant), complex litigation, personal injury (Plaintiff & Defendant), contract disputes, product liability, civil and voting rights, constitutional challenges, and government law. He has tried numerous cases in State and Federal courts, and his trials have included personal injury and wrongful death actions for both plaintiffs and defendants.

In 1979, he briefed and argued City of Rome v. United States, 446 U.S. 156 (1980). In 2003-04, he and Andy Davis served as lead and liaison counsel for 56 named defendants in a national class action. (Re Tri-State Crematory, 215 F.R.D. 600 (N.D. Ga. 2003)). From 2005 through 2012, Bob and Andy served as lead and liaison counsel for cities and counties of Georgia in a class action against online travel companies for excise taxes (City of Rome, et al. v Hotels.com, et al., U.S.D.C., NDGA, Civil Action No. 405-CV-249 HLM).  He has, every year since 1989, been listed in The Best Lawyers in America in business litigation. Beginning in the 2007 edition, Mr. Brinson was listed in the specialties of Bet-the-Company Litigation, Commercial Litigation and Personal Injury Litigation. He was named in "The Legal Elite:  Georgia's Most Effective Lawyers" published in Georgia Trend (2003-Present).

In 2005, he was recognized as one of the Top 10 (top vote getters statewide) of Georgia Super Lawyers, a joint project of Law & Politics Magazine and Atlanta Magazine. He was president of the State Bar of Georgia in 1986-87; received, in 1996, the State Bar's Award for Distinguished Service to the Legal Profession; in 2001, the Tradition of Excellence Award; and in 2016, the Nestor Award from the Georgia and Legal History Foundation. He is a Fellow in the American College of Trial Lawyers, a Fellow in the International Society of Barristers and an Advocate of the American Board of Trial Advocates.

Connect with Robert Brinson on

Robert Brinson is a member of the American College of Trial Lawyers.