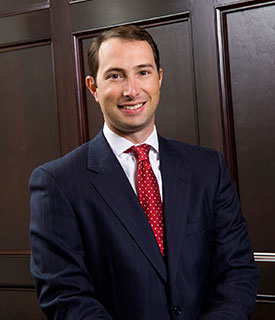 Samuel L. Lucas is a partner in the firm, and focuses his practice on litigation and has represented both plaintiffs and defendants in state and federal courts regarding a broad range of areas including business litigation, local-government law, and personal injury.

Sam, a native of Rome, joined Brinson Askew Berry after having practiced as an Assistant District Attorney to the Honorable W. Kendall Wynne, Jr., in the Alcovy Judicial Circuit. In addition to his civil practice, Sam also serves as an Assistant City Attorney to the City of Rome and as the Solicitor of the Municipal Court of Rome, Ga., prosecuting traffic and misdemeanor cases.

As an AV-rated litigator, Sam has extensive experience in federal court. In the last ten years, Sam has represented defendants in 30 cases in federal court and has obtained victories or dismissals at the motion-to-dismiss or summary-judgment stage in 18 of those cases. In 2007, along with Andy Davis, Sam obtained a plaintiff’s verdict of $30M in a wrongful-death action, which, at the time, was the largest personal-injury verdict handed down in the Rome Division of the Northern District of Georgia.

In addition to his trial-court experience, Sam is a member of the appellate practice group and has significant appellate experience, both as an author and co-author of briefs as well as presenting oral argument, on a wide variety of topics representing plaintiffs, defendants, and amici in state and federal appellate courts. These decisions include appellate-only cases as well as cases that the firm handled at the trial level.

Sam was part of a team that represented the City of Calhoun, Georgia in a class action regarding a challenge to monetary bail in which he twice argued before the Eleventh Circuit Court of Appeals.  The case is styled Walker v. City of Calhoun, Georgia, No. 4:15-cv-00170-HLM.  The team obtained reversals in both appellate cases.