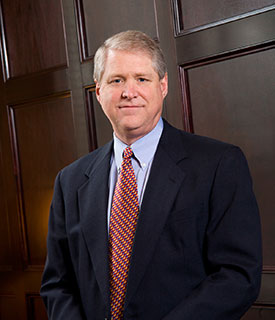 Thomas D. (Tom) Richardson has been practicing law in the areas of bankruptcy, creditors’ rights, and business litigation for more than 35 years, having joined the firm in 1982 as a Floyd County Attorney. Prior to joining Brinson Askew and Berry, Tom practiced in Atlanta with a firm specializing in bankruptcy.

In addition to his representation of individuals, businesses, and bankruptcy trustees in all aspects of bankruptcy, Tom has represented individuals and businesses working in a broad range of business litigation matters that include appeals since 1980. He likewise represents banks, credit unions, and commercial finance companies in secured transactions, financial workouts, asset recovery and liquidation.

In 2014, Tom was honored to accept an invitation to join the inaugural class of the Georgia Bankruptcy American Inn of Court as Master, an organization he continues to serve today.

Tom is active in his community.  He is a member of the First Presbyterian Church of Rome and serves on the Advisory Board of the Salvation Army – Rome.   He is a graduate of the Greater Rome Chamber of Commerce’s Leadership Rome program and later served as its co-coordinator for Class XIV.  Tom also has volunteered as a coach for various youth sports programs in Rome.